A memory of PG Holyfield

Oy, that’s a helluva lead, isn’t it? Back in journalism school, they taught me that the lead has to grab the reader’s attention. For that purpose, I think what I wrote above is ideal. I hope I never have to write one like it again. I know that I will. That knowledge sucks.

So a sad day, to say the least. Author, podcaster, all-around-great-guy PG is no longer with us. If you know of him, I’m sure you’re sad. I know I am. So to defray that sadness, I offer you a remembrance of him that may put a smile on your face. 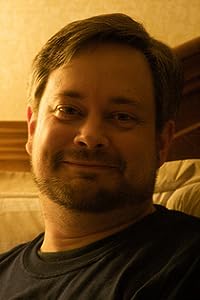 I am not so good with the memory. I can’t remember when I first met PG, but I remember when he introduced me to Tuaca. I am glad he did. While the details of my encounters with him over the years may fade or smudge — or be blown completely out of proportion, because, let’s face it, I’m me — I have Tuaca as this one little anchor to lock in who he was and how much I enjoyed hanging out with him.

As I said, I can’t recall exactly when I first met this man, but he remembered when he first met me. Apparently, it was 2006 in an elevator at Dragon*Con. He remembered it, and recorded his version of the story with a possible embellishment or two (his story is this week’s podcast episode, the link is at the top of this post). Brotha was a storyteller, and you know our kind: why tell the truth when the truth-plus is far more entertaining? So that’s how he met me.

Now I will share how he introduced me to the “taint juice of the Roman legions.”

All right, this isn’t how I met him, it’s my favorite memory of him. He was a kick-ass dude who had this constant expression of delighted surprise on his face, as if everything he saw made him think: “Holy shit, look at this! What’s going on here? I’m not sure, but holy shit this looks awesome.” Imagine a black lab with an IQ of 140 and opposable thumbs, and you’ve got PG down cold.

I may have this memory completely wrong, but this is how it happened in my head. Word is bond.

Back in 2008 at Balticon, my cousin, Francis Dominick Olivieri, was interviewing Evo Terra for “Let’s Get Pissed With The FDO,” a sporadic podcast that sometimes pops up at conventions like Balticon and Dragon*Con. The gist of the podcast is: Francis asks the guest six questions, Francis and the guest do a shot before every question. Francis usually invents the guest’s “background” on the fly, and asks hard-hitting questions about the guest’s past, motivations, influences, criminal record, history of worshiping Mussolini, the time they were chased by Columbian drug lords after “borrowing” an elephant, that sort of thing.

The goal of the podcast is, of course, to make the guest laugh so hard he/she can’t answer the questions.

Usually this interview is done before a live audience. Usually, the audience BYOBs and shows up bottle in hand, so that they can also partake of the shot-per-question glory. Francis will raise a glass, the guest and the audience will do the same, and salud, down goes Frazier.

The first few questions go by without too much incident. As the interview progresses, however, things — not surprisingly — tend to go off the rails. Which is the point of the whole thing. Alcohol abuse for the sake of community and good times. There have been no stabbings at a “Let’s Get Pissed.” So far, anyway.

On this occasion, there was an audience of about seventy people. All the folding chairs were full, people were lined up around the outside and the back of the room. Everyone, I think, had brought a bottle of some kind. Based on the expressions of the audience, many must have mistakenly drank every time someone asked them a question before the show. As in, “Hey, how’s it going?” To which the audience member would have responded: “Hold on, lemme knock back a knuckle of this Jim Beam before answering.”

Out in the audience I saw many of the friends I’ve made since I started podcasting back in ’05. I have a core of friends from high school that I love dearly, and one friend from a previous job for whom I would do anything. Outside of those cats and my blood relatives, my entire social circle comes from podcasting and cons. They are fans, or authors, or podcasters, or friends.

PG was all four of those things.

He was in the audience that day. He got there early to get a good seat. He was also schnockered. Apparently he had been asked several questions before the show. Before the room was even half full, you could tell by the look on his face that he was having the best time ever.

PG Holyfield didn’t wait for permission. If there was a good time to be had, he’d just go ahead and get it started so the engine was already warm when the other drivers arrived.

He came in with a boatload of friends. He had a bottle in each hand. One was half-full (fuck you, I’m an optimist, even now, especially now), and the other was unopened. Both bottles were of some amber fluid with the white letters TUACA down the middle. Francis noticed. He asked PG, “What the hell is that TUACA shit? Where’s the goddamn bourbon? Where’s the goddamn beer? God save the fucking queen, PG, but did you bring fucking liqueur to the fucking show?”

Francis is quite eloquent.

PG responded with a grace seldom seen in the world of con-going drunken revelry. Like the aforementioned lab with the 140 IQ, he held up the bottle as if presenting this most awesome dead bird he’d just found, and said, “It’s made in Tuscany.”

Did I mention Francis was (and still is) on the run from the Mob?

Made in Tuscany? Italian? Well, Francis promptly forgot his disdain for all things liqueur and demanded that PG advance to center stage. PG offered the half-full bottle to Francis to sample a little snort, which Francis did. After a swig, Francis announced, “Oh, my God, drinking this is like having a greasy clown in your mouth.”

Note to the reader: I am not sure when, or if, my cousin Francis actually did have a greasy clown in his mouth. I don’t think it’s germane to the story, so how bout we kick that low-brow humor of yours up a few notches and back into the rarified air that PG deserves? Thank you.

Then Francis said, “Next time we do this show, I should make the guest drink this swill.”

To which PG promptly offered the unopened bottle and said, “why wait?”

Francis was quite excited at this spontaneous burst of generosity, and accepted PG’s gift of 750 milliliters of 35% alcohol (by volume) of vanilla citrus liqueur. He announced to the audience that PG was the new corporate sponsor of “Let’s Get Pissed.” PG smiled, waved, sat back down with that look on his face (you know the one, I told you about it, the what the hell is happening here holy shit this looks awesome), and proceeded to “answer” some questions that I didn’t hear anyone ask him.

Fast-forward 45 minutes. The bottle is pretty much demolished. Evo is doing his best to give a straight-faced answer to accusations regarding his claim to be one of Madonna’s adopted children, and was he the “other man” involved in the collapse of the Jennifer Anniston / Brad Pitt wedding? Francis is screaming that question, and demanding that when he asks the audience “hey, how you doin'” the audience respond with “hey, pretty good, how you doin’?” PG is having a conversation with five people and has completely forgotten about Francis and the show and everything else. A room full of people who have never heard of Tuaca now associate it with fun, friends, general insanity and PG Holyfield.

So began a tradition that has continued through the years. Tuaca is the defacto drink of “Let’s Get Pissed With the FDO.” According to Francis, it is brewed from the taint juice of the Roman legions. It has to be good for you, because “nothing bad ever came from Tuscany.” We’ve consumed cases of the stuff. It’s also the shot de jour when I am on book tour.

That was the fun stuff. Now for the not-so-fun stuff.

The time between when he found out about his prognosis and his passing last night was about three weeks. It had to be a hammer-blow of reality: a doctor telling you that your number is up, nothing can be done, and your time left among your loved ones is measured not in years, not even in months, but in days. I can’t even get my house organized in three weeks — imagine having to scramble to arrange what you can for your family, knowing that the sand in the hourglass has almost sputtered through the narrow neck.

While no amount of time is ever “enough” when a doctor tells you the end is coming, I’m pretty sure that three weeks is at the far range of “not nearly enough.” I hope that his final few days were spent with family, and that he found some solace in knowing that he was loved.

The passing of a friend always reminds me of my mortality. PG is gone, and after an indeterminate time, I am to follow. There is no way around that, no Matrix-style bullet-dodging, no power-up, no code for an extra life or three. You can curse at death all you like: in the end, death wins.

Sometimes death is a real asshole about it. Sometimes all you get is three weeks. You get to know that — like PG did — as that time comes to a close, you won’t really understand what’s going on, you won’t be aware of your surroundings, so your days of being you are even less than three weeks. That’s how PG’s life ended.

In our American healthcare system, his sudden end wasn’t sudden enough that his family didn’t rack up significant hospital bills as they strove to make his final days as nice as they could be. And, of course, the funeral expenses are a kick in the nuts. PG left behind young daughters. If you’ve got a couple of bucks to pitch in for the memory of a lovely man, it would help his family out a great deal. Click here if you can donate.

In a weird way, PG lives on through his podcasts. Podcasts are this little thing a bunch of us did back in the day. We record our voices, polish up the recording on our computers, then post the audio for the world to enjoy. Once those files are out there, in them clouds, they are there forever. Somewhere, on many servers, ripped and copied and downloaded and stored and reposted and shared, PG’s voice lives on forever. He’s gone, but you have the privilege of letting him read you his story. The podiobook “Murder at Avedon Hill” is available for free at Podiobooks.com. Give it a listen. If you dig it, make a donation at that same site. All donations for his book are going to his family.

My friend PG Holyfield died last night. I will miss him.