A review of horror/thriller novel THE COLONY 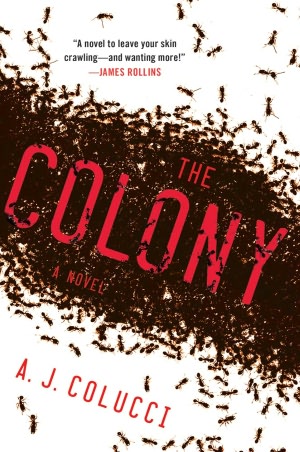 My buddy A.J. Colucci wrote this kick-ass horror/thriller called THE COLONY. I’ve been blabbing about it on the Twitters and the Facebooks for awhile now, and the book came out Tuesday.

I’ve never met A.J. in person. I only know her through this novel, which my agent, Byrd Leavell, asked me to blurb. I fell in love with the book, probably because it has a similar structure to my stuff, and you all already know what narcissist I am. I also saw a couple of things in the book that needed tweaks. Plot-structure stuff, mostly, because her science was spot-on. Stuff that it’s crazy-easy for an author to miss when he or she is heads-down for years, looking at each word and sometimes missing the bigger picture.

For my work, A Kovacs catches these problems in second-draft form (as does Big John Vizcarra, Jeremy Ellis, Joe Albietz, Tom Merritt, J.P. Harvey, Chris Grall and more). Trust me, when you are writting a novel-length thriller, where hundreds of plot threads have to line up in a “real world” fashion, it’s very easy to miss a thing or two.

A.J. impressed me because she was very excited to get this feedback. Some authors will get their feathers ruffled and be offended. In my opinion, these authors are more worried about themselves than the reader. Not, A.J., though — as we went back and forth, I heard over and over again phrases akin to “oh, that would have so annoyed the reader.” She is out to create the best product possible, because she wants people to get their money’s worth.

You need to understand that when I received THE COLONY to review, it was basically finished. A.J. had to work hard to make final changes, because publishers do not like changes at that point. She also worked with Chris Grall, who does some of my military and weapons consulting, to smooth out some issues with guns (yeah, just like me, A.J. lives at the range and knows everything about firearms … it’s just what we writers do).

I was pretty impressed with how A.J. doubled-down to fix these small issues and make the best story possible. On top of that, it’s a kick-ass book. If you liked my novella EUSOCIAL NETWORKING, you will eat this one up with a spork.

So in A.J., I think I found a kindred spirit: an author who cares about you the reader first, and everything else second. That’s why I consider her a buddy, even though we’ve never met in person. That, and she send me a bottle of Macallan’s as a lil’ thank-you gift. I’m easily swayed by the single malt.

I did the video above as an Amazon review, so it would appear on the page for THE COLONY. Guess what we found out? Amazon bans book reviews by other authors! I’m not the first to discover this; the awesome Joe Konrath blogged about it here.

Konrath (pictured at right) is far more active in prosthelytizing the indie eBook world than I, and also knows more about the publishing biz. If you’re curious why Amazon would ban authors — people who might know a thing or two about what makes a book “good” — than read his post. He kind of sums it up here:

The fact that a binder can get a thousand fake reviews because of Romney’s comment, but I can’t honestly review one of my peers because I’m an author, is a bit silly, don’t you think? Amazon allows 1 star reviews from people who haven’t even read the book, but deletes positive reviews from people who honestly enjoyed it, and somehow that’s improving your review system?

So those uninformed, misguided or even downright malicious reviews can stay, but reviews from authors are banned. Awesome.

Amazon did this, I believe, because some authors would organize two kinds of campaigns:

Those are real problems that Amazon has to deal with. I can see the flat-out banning of author reviews solves these problems, but it’s throwing the baby out with the bath water. Authors spend their entire careers learning what makes a good story, and an honest review from an author is a great way for potential readers to know if they would or wrould not like a particular title.

So, imma go back to writing. What are your thoughts on this Amazon banning of author reviews?