PUNISHER Ep 2 Spoilers, a.k.a. “How My Writing Has Changed Since I Learned How Guns Actually Work.”

I am in no way, shape or form an expert on firearms.

I write about guns extensively in my work. Not having a background in law enforcement or the military, and not coming from a “firearm family,” when I began writing my knowledge of guns was limited to what I’d seen on TV and in the movies. You heard that phrase “you don’t know what you don’t know?” When it came to firearms, that was me.

Which brings me to one of my early mistakes. Frankly, it’s an exceedingly common error for suspense/thriller/crime writers who don’t have experience with handguns. What’s the particular screw up? The classic trope: “The gun clicked on empty.”

THE PUNISHER SPOILERS BELOW!!!

I did this at least twice in my early books, and it is there is this rookie, easily correctable error all it’s glory in THE PUNISHER S1E2.

Frank Castle fights agent Carson Wolf. It’s an excellent fight scene (to the background tune of “Ain’t That A Kick In The Head”), because Wolf is a bad-ass hand-to-hand combatant and gives Frank a real run for his money. At the end, though, Frank gets the upper hand. Wolf (played by C. Thomas Howell) is tied to a chair with a flimsy silk tie restraint. Frank is interrogating him with some pretty severe punches. Then, common knowledge of firearms takes the brown bus to Shit Town.

Frank shoots Wolf in the leg. Ouch! Then, after repeated establishing shots showing Wolf working on loosening the tie restraint, Frank gets too close. Ooops! Wolf snatches Frank’s gun away. After a bit of dialogue where Wolf conveniently gives up the Sekret Plan™ that he wouldn’t give up while being tortured, he decides to kill Frank. Wolf points, shoots … and the gun clicks on empty.

THE PROBLEM: Wolf is holding a semi-automatic handgun. When these devices run out of ammo, the slide locks open. That means it looks like this: 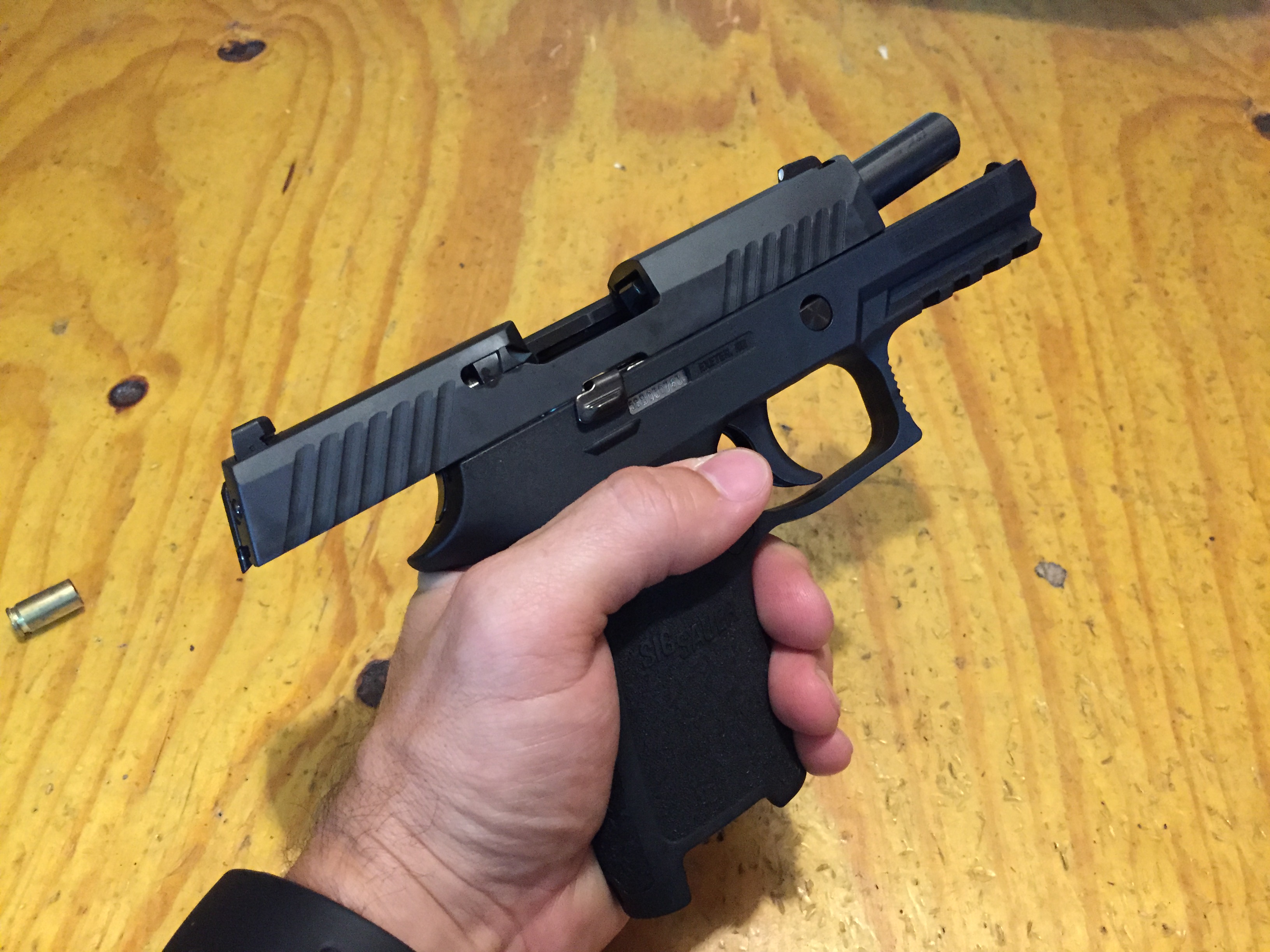 The writers have clearly established that Wolf is a bad-ass operator. He’s no newbie to firearms. If the slide was locked back because the gun was empty, he’d notice. Trouble is, it’s not locked back. Frank fires the supposed last bullet, and the pistol’s slide is not locked back.

Clearly this was a setup by Frank. He trickily gave up the gun so that Wolf would — for some unknown reason — do the Evil Gloating trope and gives up said Sekret Plan™. Here’s that scene:

Then, we see the moment where facts fly out the window:

Hey, Scott, you jackass — couldn’t Frank have sneakily ejected the last round when Wolf wasn’t looking?
Sure, if we had seen Frank turn his back or done anything to hide the gun, I could buy that. Trouble is, he doesn’t — the gun is in clear sight of Wolf (and us) from the time Frank fires the “last” round until Wolf pulls the trigger and the gun clicks on empty. I re-watched the scene, twice, to be sure. Frank does turn his back, briefly, but if he ejects that round we need to either see it happen, or get some kind of information after the fact (see how I would correct the scene, below, as an example).

Hey Scott, you ridiculous buzzkill — couldn’t Frank have used a blank round?
No. A blank round would have fired (kaboom!) there just wouldn’t be a bullet coming out.

Hey Scott, you pedantic douche — couldn’t Frank have used a dummy round?
Sure. A dummy round in this instance would be a cartridge that takes up the space of a live round, but is just an inert hunk of metal. That would solve the problem. This is probably what happened. The trouble is, that’s the kind of information the writers need to convey, or they potentially take a certain group of viewers out of the story — that “group” being anyone who has ever taken even a basic firearms training course.

Jesus H. Christ on a Broken Crutch, Scott — can’t you just watch the show?
Sadly, no. I lost the ability to just enjoy a show shortly after I started writing novels.

Scott, you idiot, can’t you see they just made a mistake? Just like you did? 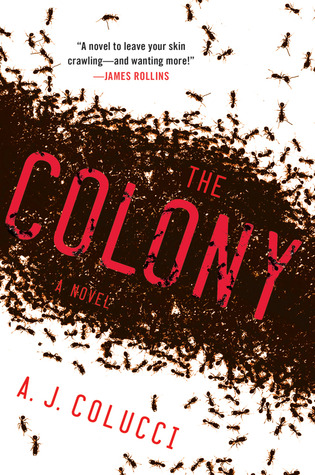 Here’s the thing with that. I know novelists can make this mistake (and often do), because, by and large, we’re isolated in a room by ourselves. We don’t know what we don’t know. If we get an editor who also doesn’t have firearms experience (and hasn’t run into this common error before), it’s easy to see the error make it to print. For example, I was asked to blurb the novel THE COLONY by A.J. Colucci (a fun book if you dig killer ants). I read the book and found “the gun clicked on empty” mistake. I was one of the last people to read this before it went to print — if I hadn’t seen this mistake, it would have wound up in the final book. It happens.

The difference between novels and TV shows is that a production like THE PUNISHER has literally hundreds of people working on it. Without a doubt, the showrunner and writers knew this was an error and they didn’t think it impacted the story enough to do something about it.

Okay, Mr. Smart-Guy, since you know everything, how did this happen?
My guess is that they did explain that Frank had either sneakily ejected the round, or he had loaded a dummy round. I’m betting that was in the footage before the final edit. During the final edit, someone cut that part out, deeming it wasn’t as important as, say, additional interaction between Frank and Karen.

It didn’t bother me one bit, brah, and I know me some guns!
Cool, I’m glad it didn’t take you out of the story. It’s a minor issue, but it is an issue. It just depends on how you react to such things in your entertainment.

How would you have fixed this, Sir Expert?
One simple change of dialogue keeps the scene as-is yet corrects the error.

So now you don’t like the show?
So far I love it … but now I love it a little less. Episode One was spectacular, an example of deep emotional writing and character establishment that every aspiring TV show creator should watch. I was all the way in. I’m still in, just not as much as before.

That’s what can happen when you make a mistake like that. As a creator, you have to try and get the easy things right. I have addressed my own shortcomings in firearm knowledge by a) using a consultant, Chris Grall, who has extensive military experience, b) getting basic firearm training, and c) getting a firearm safety certificate, a handgun of my own, and training with it on a fairly regular basis (with Matt Mellinger of the Glock Store in San Diego).

Yep, I had an area where I didn’t know jack shit, and I addressed it. Guns are prevalent in suspense and crime fiction. If you’re writing in those genres, take the time to find out what you don’t know and address your ignorance. It will help keep more readers/viewers fully immersed in your story.

This holier-than-thou post is sponsored by the GoDaddy Promo Codes CJCSIGLERC, which gets you a brand-new dot-com domain for just 99 cents.