Many readers came to the my Galactic Football League series of novels from 2010 to 2012, and many of those thought Quentin was based on Tim Tebow. Nope. I wrote THE ROOKIE‘s first draft back in 1999 or so, when Tebow was 12 years old. Quentin’s large size was originally based on Danté Culpepper, who at 6-4, 260 was a beast of a QB. I combined Culpepper’s skill and size with Jim McMahon‘s attitude and backstory to create everyone’s favorite Ionath Kraken.

So why is Cam so “Quentin-esque,” you ask? Allow me to enumerate:

1. SIZE
Quarterbacks may look smaller on the field, but that is only because they are surrounded by freakin’ giants. In truth, the typical NFL quarterback is a big person. So why are Barnes and Newton similar in this category? They are bigger than most people who play that position. 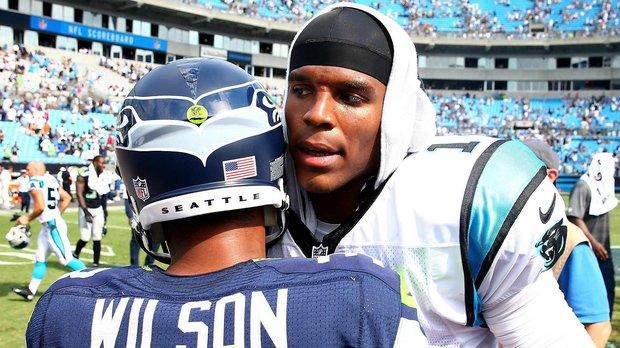 Russell Wilson is 5-11 — so tiny standing next to Cam.

The GFL is set seven centuries in the future. Human players have gotten much bigger than they are today. Where GFL quarterbacks average about 6-9, 310. When Quentin is nineteen and playing Tier 3 ball for the Micovi Raiders in THE ROOKIE, Book I of the GFL series, he’s listed at 7-0, 360. The phrase used for his taller, more massive physique is that a Human that size could be “a small tight end.” By the time he hits Book V, THE CHAMPION, he’s 23 years old and a grown-ass-man at 380 pounds.

In the NFL, people are smaller overall, but in that context Cam’s size stands out. The average NFL quarterback is roughly 6-foot-3 and 220 pounds. Newton is 6-foot-5, and listed at 245 pounds although most pundits say he’s 250 or even a bit over that. That’s almost as big as the Chief’s Travis Kelce (6-5, 260), who had a breakout season this year, and only a tad smaller than superstar tight end Rob Gronkowski (6-6, 265).

But Cam’s only 25-30 pounds bigger than other QBs, you say. That’s not that much, you say. SHUT YOUR VILE MOUTH, SIR AND/OR MA’AM. Bigger, faster and stronger means more force, which is something that comes into play when both QB’s carry the ball …

2. SPEED & RUSHING ABILITY
There are many quarterbacks as large as Cam (and Quentin), but what makes both superstars different is they are so big and they can run the ball. Either guy is like a tall running back, complete with agility for sweet moves combined with the mass and strength needed to run your ass over.

Obviously I can’t show you clips of Quentin, but I can show you clips of Cam. This first clip shows how size and strength can let him do things other QB’s can’t do. Let me break it down into three categories: strength, speed, and scrambling/open field running.

Speed = Highlight #2
Scrambling / open field running = Highlight #4
Passing accuracy = Oh, he has that, too? Highlights #3 and #5

If you don’t know football, highlight #4 in that reel is defined as “f-ing ridiculous.” That is a 6-5, 250-pound man making those moves, defying momentum and inertia to completely change direction numerous times while highly trained assassins are trying to decapitate him.

Strength:
The NFL doesn’t want people to play videos outside of YouTube, unfortunately, so hit “play” and if you can’t see the video just follow the link:

3. ADVERTISING MAGNETS:
While we never “see” Quentin’s face, his good looks are frequently commented on. Yolanda Davenport mentions it, as does yacht salesman Manny Sayed who wants Quentin to be his pitch man — the face that sold a hundred really expensive ships, so to speak. Newton is also one handsome devil, with a bright smile that makes him a target for Madison Avenue.

In fact, Cam is poised to become the NFL’s biggest pitch-man, taking the title away from self-deprecating ad fave Peyton Manning. This is where Quentin and Cam part, however — Quentin gets hundreds of offers to advertise, and passes on all but one. It looks like Cam has never met an ad campaign he didn’t like.

4. LOVES HIS FANS:
Quentin makes a habit of circling the field after every home game, high-fiving fans who reach down over the barrier. Ever wonder what that looks like? It looks exactly like this:

Okay, Cam doesn’t high-five as many aliens as Quentin does, but you get the point.

5. BOTH MEN ARE BLACK:
Surprised? Many of my readers are. In all the GFL books, I intentionally gloss over Quentin’s skin tone in his descriptions. I wanted every man, woman, boy or girl to be able to project either themselves or their ideal image of an amazing athlete upon the character of Quentin Barnes. Are you Pakistani? Than maybe you think of Quentin as Pakistani. Are you Hispanic? White? Arabic? Russian? Have that favorite QB from your college team? Fondly remember your star high school quarterback? In your mind, dear reader, Quentin can be any of those things?

But make no mistake: I wrote the book, and Quentin Barnes is black. In the GFL (seven centuries in the future, remember), a black quarterback is nothing unusual and no one gives a shit about the color of your skin — unless your blue, I suppose (shout-out to Don Pine). There is far more focus on Quentin hailing from the Purist Nation, because no PN quarterback has ever won a Galaxy Bowl — a direct parallel to something people pointed out about black quarterbacks in the NFL before the great Doug Williams snagged dat ring as part XXII in 1988. Until Williams, there was this bullshit wag that a black QB couldn’t win the big one. In the GFL, people say the same thing about Purist Nation quarterbacks.

Cam is black, obvs. He catches a lot of shit for his excessive celebrations (first downs, touchdowns, gain two yards, you name it, that dude will celebrate it). Some think he catches that shit because racism: whitey can’t handle a successful black QB. I’m sure there’s an element of that, but in my opinion it’s more of a culture clash than outright racism. When I played football and wrestled, for example, we were taught to celebrate in moderation, that humility was a part of sportsmanship. Cam says screw that and has a ton of fun playing the game. This might be something I blog about down the road — Cam’s “having fun” comes across to many as “bragging” and “rubbing it in” against the other team. Fun? Absolutely? Good sportsmanship? Not so much. I don’t see anyone bagging on Teddy Bridgewater and E.J. Manuel. James Winston is definitely catching some crap, though is it any more or less than Ben Rothlesburger? They’re both under fire for the same off-field reasons.

It’s like they are cosmic twins separated by a mere 700 years!

MY SUPER BOWL PICK:
This is a hard one. I want to see Cam win, because I think Cam is the total package and reminds me a lot of my vision of Quentin Barnes. I think he makes the sport fun and embraces the fact that he’s lucky enough to get to play a game for a living. Does he have his rough spots? Sure. He’s brash and he’s young.

I want to see the Broncos win because I think Peyton Manning is one of the best QBs of all time, an on-field genius who changed the way the position is played. He’s overcome a lot to make it to this last game. It would be great to see him with two rings (mostly so his brother Eli can’t lord that over him at Thanksgiving dinner).

So my pick? I think Carolina is better overall. I pick the Panthers 27-17. What’s your pick?

Here’s to hoping for a great Super Bowl.