There, I said it. If you keep reading, that’s your business. I have given you due notice of spoilers and stuff.

All right, let’s get into this.

The “is he dead / is he not dead” debate has gone on for a few weeks, and we finally have an answer. An answer that, to me, feels like a total and utter cop-out. People are happy to have a beloved character still kicking, but in retrospect, the threat to Glenn now has all the dread and gravitas of a Joss Wheedon death — i.e., not really “dead” at all, or in other words, Glenn has come back from an absolute sure-fire finish to his face.

Why does this development feel so hollow to me? I’ll give you my reasons. If you like, tell me what you think in the comments.

GLENN WAS A YUMMY GUT-TREAT SITTING RIGHT THERE:
Yes, Nicholas was on top of him. Sure. I get that. We now see the camera angles the director was playing with to “trick” us unto thinking the zombies were dining on delicious Glenn Natural-Casing Sausage™, and not just savory Nicholas Nutella™. The Nick blanket gives our boy maybe … two seconds of extra life. Look at the picture at the top of this post: rotters were all around him. They even had hands on or near his face. He’s got blood on his skin. He couldn’t be more appealing to the zombie palate if he got a neon tattoo on his head that said “Eat Me.”

In other words: his face is exposed and he is surrounded by zombies and he is pinned down.

For the zombies to have ignored him when he’s a sitting duck like that is a total cop-out from the writers. Yes, I know they have a job to do and that job is ratings, and stretching out this faux-death for four weeks is part of the storytelling gig. I accept that. But let’s not pretend that this is anything but an intentional misdirect, and a misdirect that comes at the expense of ignoring the well-established behavior of the bad guys.

It’s not like there were only two zombies feasting on Nick, and they were so busy they didn’t have time to chomp down on the Glennster. This was a Black Friday crowd just before Best Buy opens its doors. There were dozens of killers in easy reach of Glenn. The odds of them ignoring him while he cried like a beh-beh and stared at the blood fountain? Nil, bro – nil.

WTF WITH JUST LEAVING HIM ALONE?
Okay, this is the big one for me. He is under a dumpster that is completely surrounded by zombos. They even try to come get him, and he does some sweet face-stabbing. Then, for reasons that are both inexplicable and completely contrary to the established canon, the f-ing zombos leave him alone and walk away.

Why, because he’s quiet? Because they can’t get to him? Over and over, when we see trapped heroes in this show, we’ve seen zombies continue to press at doors, walls, windows, fences, etc. They stay there for days, even weeks. Look no further than Alexandria, where they are hanging out on the walls for weeks on end as if they are Millennials in line for those precious Justin Beiber tickets. Pretty sure that if zombies would leave you alone if you’re quiet, then one single night of the Alexandrians sleeping in their comfy beds would make most of the horde move on.

And before you bring up that Rick hid under a tank in Season One, remember, he went into the tank, and was completely sealed up inside.

This point is where things get frustrating for me. We have Zombie Rules™. Once they sense prey in the open, they pursue that prey non-stop until they either a) get stabbed in the face, b) catch said prey, or c) said prey finds a way to escape through a back door or what have you.

Am I wrong about this? Have we ever seen zombos two feet away from a juicy human only to leave that human alone because the human was real still and real quiet? Because, as a viewer, that would be great information to have, so when people are in danger I can scream at the TV: “Hey! Just hide behind a door and be real still and real quiet and everything will be jake!”

AND NO, THE “COVER YOURSELF IN GORE” TRICK DOESN’T APPLY
That only works if you use a well-decomposed zombo — Nick blood is an appetizer to zombies, not camouflage. We didn’t see Glenn apply Clinique Zombie Concealer™ to himself, did we?

STILL THE BEST SHOW ON TV, BUT …
I’m still a fan, but the shine is off the apple somewhat. This was intentional misdirection. Or, to put it in other words, the writers cheated. We were given rules that provide a structure for understanding what characters can and can’t do, in order to let ourselves dive all the way in and feel the danger, the drama, the very real threat that characters can and do die. This scenario completely violated those rules. I’m sure I’ll tune in next week to see who buys it in the mid-season finale, but that edge-of-your-seat feeling won’t be quite as edge-of-your-seat.

What do you think about the episode? 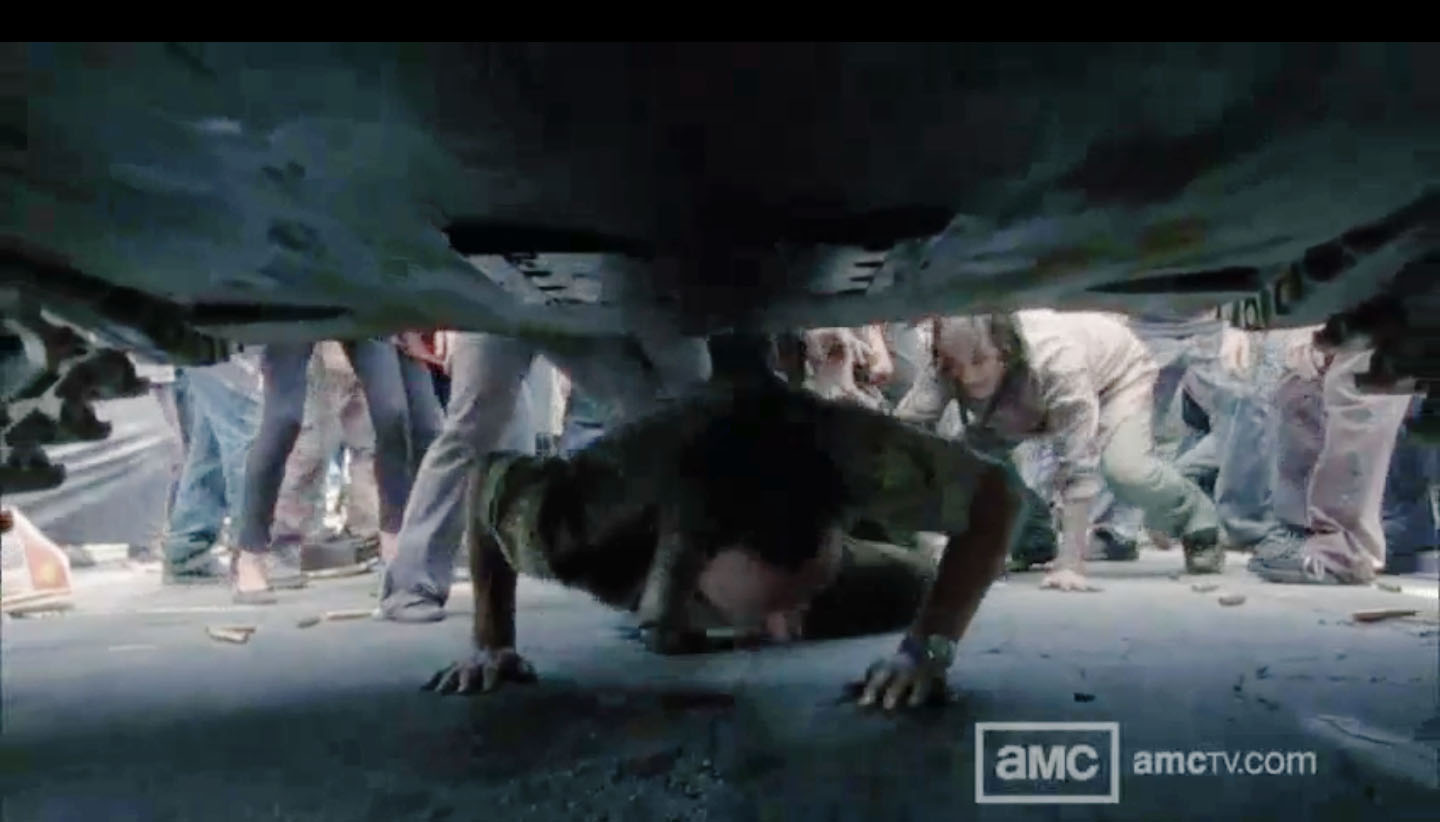 GFL VI delay & what we’re doing about it

Sheltering in Place? Free eBooks for you & yours!