The Black Widow that I saw in the theater

There, the cat is out of the bag. In all things, my perceptions are filtered through the eyes of a man. Keep that in mind as you read this. I’m not an expert on these subjects, and often find myself completely mystified when strong opinions swirl around particular subjects. I listen as best I can, try to understand and empathize, but I can’t actually know what it’s like to be female.

AVENGERS: AGE OF ULTRON has been quite the hot topic as of late. In particular, some people are upset with the portrayal of the character Black Widow. I’ve read a bunch of write-ups on this to a) try and understand the various viewpoints, and b) as a creator of fiction, when the Internet goes off on another creator I want to see what landmines have been stepped upon.

Because if Joss “Strong Female Character” Whedon* can be taken to task as a sexist, so can anyone else. So can everyone else. Yes-yes, I know, it’s just a comic book movie. To you, perhaps, but not to everyone. AGE OF ULTRON has become a focal point in an ongoing discussion about sexism in entertainment.

Today I read a fascinating take on the situation over at NPR, written by Linda Holmes. This post had two great points. First, if you don’t get why people are fired up about each and every female role in scifi/comic-book movies, her analogy using the importance of a single MLB game vs. a single NFL game is fucking fantastic. Dead-on and I wish I’d though of it. Second, she makes a key point that if you swapped gender of any Avenger in the movie, people would still be up in arms about how that character reinforced female stereotypes or diminished women in general. Translation: sometimes creators just can’t win. Great read.

But some of the other great points in that post – just like most of the posts I’ve read on the subject — had me shaking my head and thinking either I don’t see that at all or I completely missed that when I watched the movie.

I don’t know the answer to that. What I do know is how I felt about Black Widow while I watched the flick. I just didn’t see what many other saw. I saw an awesome, kick-ass character, my favorite in the whole movie (I’ll explain why she’s my favorite at the end of the post). She’s female? I didn’t give a shit. I also didn’t give a shit about the gender of other characters. The fact that I feel that way is, as some people see it, a key part of their point. They see blatant sexism, and I see nothing at all (well, almost nothing).

In retrospect, after seeing the points of other people, I better understand why there are cries of “sexism!” But when I watched it in real-time, here’s what I thought:

Black Widow is flat-out bad-ass:
She gots no super powers. No powered armor. Training? Sure. Swagger? Absolutely. Skills? You know it. But powers? Zero. This isn’t Wolverine: for Natasha Romanov, a bullet to the head = dead. Out of all the Avengers, Black Widow is my “everyman.” She’s the people in the seats, not someone who can single-handedly tear a tank to shreds while laughing as bullets bounce off her chest. Hawkeye has that same feel, but I don’t connect with Jeremy Renner’s performance the way I do with Scarlett Johanson’s. Renner is a fine actor, sure, but in the context of the Marvell Universe he feels wooden to me. He’s Renner playing Hawkeye, while I forget Scarlett is Scarlett and see only Black Widow. Therefore, up on the screen, she feels like my own kind, and that makes me root for her the most.

Black Widow calms down Hulk:
These scenes are viewed as sexist by some. What I saw was this: “Holy shit — is she crazy? She’s trying to calm down the Hulk by herself? No armor? No supernatural god-like powers? Did she not see Hulk randomly smash the crap out of Thor in the last flick?”

One punch like that against BW and she’s dead. She doesn’t have superpowers, remember? Yet into the breach she goes, risking her life to do something no other Avenger can do. Is this a sexist Beauty & The Beast trope? Maybe, but if so, the trope was lost on me. I saw an insane amount of courage and confidence. Unfortunately, the only ready phrase in my personal lexicon for this act is more than a bit sexist in itself: Black Widow got a pair of giant brass balls on her.

Black Widow picks up Caps shield:
Another element that some found sexist was BW scooping up Cap’s shield while riding on the back of a bitchin’ motorcycle. As in: she’s only good enough to pick up the men’s toys. Granted, her line “I’m always picking up after you boys” feeds directly into that perception, but, again, I didn’t see sexism or belittling. What I saw was one Avenger doing a sweet one-handed move off the back of a bitchin’ motorcycle going like 80 miles an hour so she could have her buddy’s back. Or, in the words of Tenacious D: 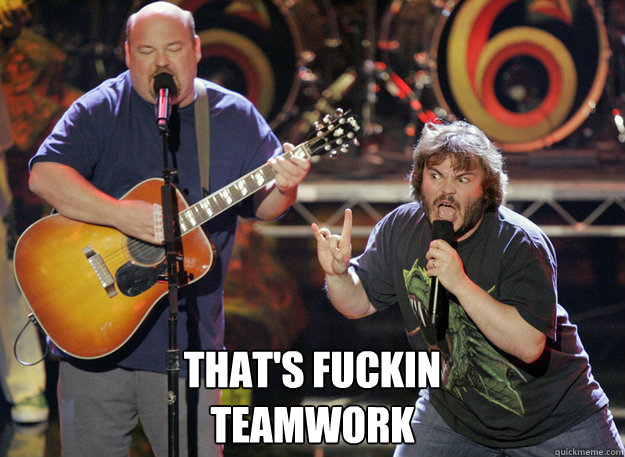 Black Widow bartending**:
Out of all the potentially sexist things in the movie, this was the only one to give me pause. At first, I assumed she was bartending because there was information to be gleaned, that someone at the party had details and Natasha was doing what Natasha does, playing possum, preparing to manipulate some evil-doer. As the scene progressed and I saw she was, indeed, just slinging drinks, I thought: Tony Stark doesn’t have enough cash to hire a freakin’ bartender? I was all, why is the only chick on the team pouring booze while everyone else gets tanked? Honestly, I still don’t get it. I wouldn’t be surprised if there is some deleted scene that better explains this.

Rescuing Lil’ Baby Vision
Despite having no superpowers, Black Widow rides a bitchin’ motorcycle out of a freakin’ hoverjet, hits the ground like a bat out of hell, and wreaks havoc. She’s shooting at Ultron (or one of the Ultrons, I can’t recall), winds up solo in the back of an enemy vehicle, sends it sailing to her buddy, then does some sick-ass gymkata shit to jump out of a perfectly good aircraft and land on another — even though she’s got no chute, wings, and can’t fly.

I’m pretty sure this scene hasn’t drawn any accusations of sexism. If so, I’m missing that as well. She was bad-ass.

“You think you’re the only monster on this team?”
This is the big one that anchored much of the outrage. The Internet Perception is that Natasha Romanov thinks she’s a monster because she can’t have children. As in, you wimmins are good for breedin’ and if you can’t do that, well, then you ain’t much good to this here village. I get why this has sparked some outrage — if that’s how you interpreted the scene, I see why you felt it’s a pretty fucking outrageously bad bit of writing.

But yet again, that’s not what I heard at all when I watched the movie. First of all, we’ve seen Black Widow tell people what they want to or need to hear, time and time again. She’s a master manipulator. She outsmarted smarmy Russian dudes, took a beating to get the info she wanted to get. She outsmarted the God of Mischief, for fuck’s sake. She’s an expert at reading emotions and knowing what to say to get people to do what she wants. That skill set also makes her incredibly empathetic. If she’s the one comforting you, she knows what you need to hear.

Second, we just finished listening to Bruce Banner’s anguish that he can’t have a family, and therefore has nothing to offer Natasha. Banner’s self-identity, in this instance, comes down to procreation. Them mens cain’t have babies, so they’s no good to this here village. Natasha empathizes with him in this regard, shares that she has the same issue — but when she calls herself a monster, I didn’t see infertility as the reason.

What I heard her say was this: You think you’ve got it bad? I was trained all my life to be a killer, and I killed a shit-ton of people for a cause that turned out to be bullshit. They turned me into a death machine and took away any chance at a life I don’t even know if I want, they took away my ability to choose. Yet here I am, doing the best I can — if I can do that, so can you.

Did I mention up above I’m not female? I think I did. So maybe that’s why I missed this in theater. All I can tell you is my gut reaction to her speech: she was there for her friend, and she exposed her own vulnerabilities to try and help him deal with his shitty situation.

She’s my favorite character in the movie, and here’s why:
More than any other Avenger, I identified with Johanson’s Black Widow

Natasha Romanov is just a human being. She was given nothing. She had to work her ass off, had to train for years to achieve her abilities. She was a product of her environment programmed by her culture — she had to recognize that what she’s been taught was wrong, then have the brass balls (sorry) to change, to put herself at risk by following a path she thought was right. And after getting out, did she take the easy path and lead a life of safety and comfort? Nope, she decided to get up on that wall and fight to defend what she believed in.

Scarlet Witch was also bad-ass:
She’s one of my favorite characters from back in my early comic-book days. I was thrilled to see her on screen, screwing with people’s heads and dusting poorly built robots left and right. I’m not sure how that factors into the overall mix of things. Two two of the seven supers were female (not counting Ultron as “male” because aside from the voice there’s no gender, this Saturday Night Live skit notwithstanding).

Sexism is sometimes hard to see:
Aside from the bartending scene, I missed a ton of what some people found to be sexist. I get those perspectives now, but in the theater, I thought BW was a bad-ass character in a fun-but-almost-incoherent flick

So I wonder: is it good that I missed these things in the theater, is it bad, or is my individual reaction in the theater irrelevant to the larger discussion? If you have a take, let me know in the comments. And remember, on this site, we treat each other with respect — no douchbaggery permitted.

*Looking at some of the Twitter Outrage about AGE OF ULTRON, I wonder how many of these people were in pre-school when BUFFY THE VAMPIRE SLAYER finally ended. Did you know it ended thirteen years ago, and premiered eighteen years ago? Yes, you’re old. You’re welcome.

**Since posting this blog, I’ve learned that the probable reason for BW being behind a bar was that Johanson was pregnant and they had to hide the baby bump. Talk about a potential continuity error, sheesh!