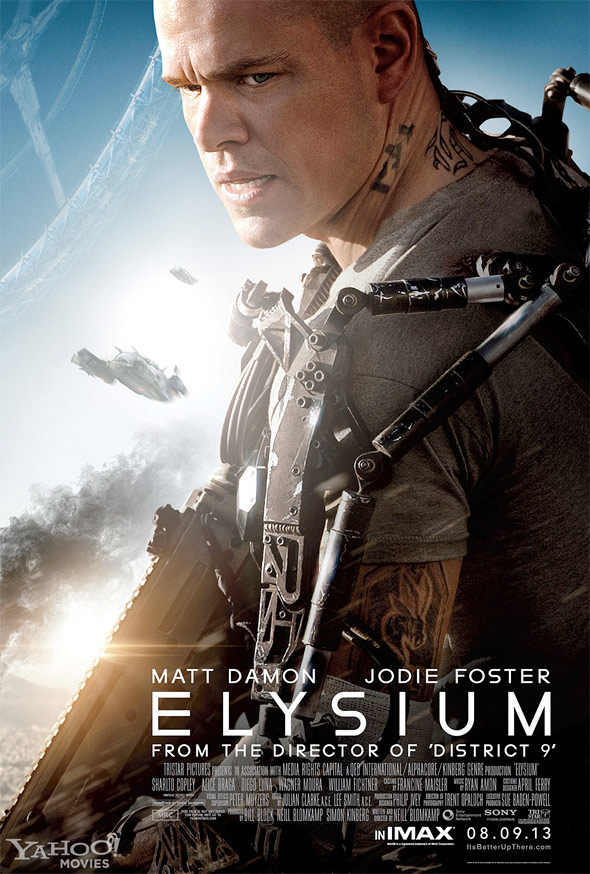 Hey, want to watch an action flick? I can give you a quick, step-by-step plan to get the ELYSIUM experience without actually leaving your place.

You won’t have any idea of what’s hapening in that fight scene. If you’re a fan of action movies, I just saved you $12 on a movie ticket for ELYSIUM, because it’s exactly the same thing.

I try to avoid any kind of negative reviews on this blog, but after the dissappointment of SHAKY-CAM THE WOLVERINE, I have to vent about SHAKY-CAM ELYSIUM. It wasn’t long ago that I watched SHAKY-CAM HUNGER GAMES and thought, “oh, well, that’s a flick aimed at a younger demographic and was directed by someone who has never done an action flick, so of course when it comes to hand-to-hand battles, they get lazy, cop out and make the fight scenes some scrambly bullshit to convey the ‘crazy confusion’ the characters face in a fight.”

Little did I know that HUNGER GAMES was just part of an overall trend.

A few days ago, I saw SHAKY-CAM THE WOLVERINE. Not knowing it was directed by Mr. Shakey-Cam, I expected great fight scenes because it was a big-budget comic-book flick. You know, superheroes and stuff? The first fight scene in that movie might as well have been left on the cutting room floor. If the point is to show that Wolverine is a total bad-ass, then the point is missed, because you have no idea what’s going on. It was a shame, becuase I thought the first 15-20 minutes of that flick were awesome. I enjoyed the character establishment, the setting, the plot construction, all good. When the fights started, however, they were so bad it took me out of the movie.

Wait, maybe the fights were good, but I wouldn’t know: everything shook so damn bad. Nice directrial decision there, guy.

But then comes SHAKY CAM ELYSIUM. I’m a big fan of DISTRICT 9 and couldn’t wait to see director Neil Blomkamp’s next flick. Little did I know he was fired in mid-shoot, and replaced by Mr. Shakey-Cam. Are the Matt Damon fight scenes any good? I couldn’t tell you, because the DP and cameraman were both so strung-out on meth DTs that they’d make a gyroscope tilt and shake and jitter.

Honestly, it’s to the point where I want the Motion Picture Association to give a new kind of rating. In addition to “R” and “PG-13,” I want “SC” for “shakey-cam.” If it’s got that rating, I don’t want to see the movie. I don’t want to pay good money for lazy filmmaking, or for a directorial decision where he/she wants the viewer to “know what it feels like” to be in a fight. Know what? I’m in a cushy theater seat, not in an alley in the bad part of town getting the crap kicked out of me. I don’t need to “feel the frentic energy” of a fight. I need to be able to see what’s going on. I need to experience what used to be the grand art form of fight choreography, of watching the big screen and saying “ohhh, snap! Did you see that?”

I mean these fight scenes? Unwatchable. I should have closed my eyes and taken a nap, not stared and waited to get my money’s worth.

Oh, you want the overall review of ELYSIUM? I’ll break it down the overly simplistic, heavy-handed political message for you this way.

ON THE GOOD SIDE:
Elysium isn’t all bad, there’s plenty to enjoy.

So, if you like big-picture eye candy, go and enjoy. If you like heavy-handed political messaging in your scifi, a-la AVATAR, put on your Che Guevera beret and dig in. If you like looking at a bulked up, tatted-out Matt Damon, expect your tingly bits to tingle overtime. I thought the art-design was top-notch, but after the second fight scene I really didn’t care anymore.

Here’s my final bitch — if you’re going to make an action movie and rely on fight scenes to pack the seats and move the story forward, then make a damn fight scene. Dear Hollywood: stop being so frigging lazy. No one likes Shaky-Cam. Yes, your movie makes money, because there don’t seem to be any options out there. Honestly, fight scenes in THE WOLVERINE that are confusing and unwatchable? How does that even happen?

Hopefully, DISTRICT 10 will see Blomkamp get back to the great action we saw in DISTRICT 9. But, I’ll wait to see the tweets, because I certainly won’t be there opening night to find out for myself. From now on, my $12 and I are staying home.

DVD review: UNDER THE SKIN

Rating movies: Do you give a higher score to a lower-budget film?