Regaining that sense of wonder

Old, crotchety and judgemental is no way to go through life, son.

I remember being twelve years old. I remember pedaling two or three miles to TJ’s Party Store. You know the way: down my dirt road, onto the highway, over the bridge, past the other party store the kids didn’t like to go because the old lady would stare at you like a hawk watching a wounded seagull, then onto a bigger highway, with the cars and semis whipping by just a few feet away, and finally to the store with it’s magical, towering rack of comics.

Hell but that thing was tall, wasn’t it? Had to stand on tippy toes to reach Spider Man and the X-Men. I was all Marvel, all the time, mind you — I had some buddies into Batman and Superman and Justice League, but my parents taught me not to judge. And Daredevil: he was pimp before I even knew what the word meant (Badger — still my all-time favorite — would have to wait until I was riding five miles instead of two and could hit Cheboygan’s only comic shop). I’d load up on comic books, candy, grab a pop or two (because what twelve-year-old Scott needed was sugar and caffeine, as you can well imagine), then pedal back home to read up on the exploits of my favorite characters.

And I loved the stories. I loved them all. The other day, I picked up a couple of comics the other day, one specifically because people rave about the writer’s storytelling skill. The comic sucked. Maybe that’s because it was a big ensemble cast and I wasn’t up on the back-story of some fifteen characters, but the story was terrible. I found myself analyzing the story instead of enjoying it, picking it apart and finding the holes, errors and inconsistencies instead of just soaking it in the way I used to do.

Yes, I am going somewhere with this.

That twelve-year-old, skinny-assed ball of hyper also loved the movies. There wasn’t jack shit to do where I grew up (other than swim, bike, explore the woods, read and play D&D and Star Frontiers and Champions, which we did every Saturday and Sunday, all day long), so we were big into movies. At two bucks, hell, the theater was a bargain. Mom would ship me off with two bucks whenever she could. My buddies and I watched everything, usually more than once. It was also the beginning of the VHS era: what we didn’t see in the theaters, my dad would rent and we’d watch at home.

And I loved the movies. Everything I saw seemed to be more amazing than the thing that came before it. I’ll give you a partial list of the movies that I went crazy for back in the day (in no particular order). These range from 1980 to 1989, but the general reaction was the same throughout that era:

There are some rock-solid classics in there, sure, but have you ever treated your adult eyes to a re-watching Galaxy of Terror? Tron? Night of the Comet? And don’t even think about firing up Battle Beyond the Stars. Trust me. I know of which I speak.

Some of those movies were great, some were awful, and I loved every single one of them.

When I go to the movies now, I start analyzing even before I take my seat. I break down plot beats. I critique character motivation. I seethe at the easy stereotypes. I watch lazy storytelling and feel that the people who made the movie don’t respect me, and don’t give a damn about my hard-earned money. And this is every … single … movie. Even for the movies I like, I walk out with a shopping list of things that bugged me.

Sure, I’m older now. Sure, I’ve seen more of the world and have a larger body of knowledge, more context that the thing I thought was so cool when I was twelve was actually a rehashed plot beat that’s been used over and over again since the first frames of celluloid cast the first flickering images on the first movie screens. And what’s more, I tell stories for a living: it’s my job to analyze these things, to break them down and look for ways I can be better at what I do.

But this caustic, over-analytical method of consumption is so pervasive, for books, comics and movies, that I have to ask myself: what happened to my sense of wonder? Why can’t I just take it all in without slicing and dicing? I mean, it can’t all be bad … can it?

Last week ARealGirl and I went to ComicCon, along with 130,000 or so of our closest friends. While there were plenty of jaded entertainment professionals in that crowd, by an large it was packed with people who went ga-ga for freaking everything. “Oh, man, look at this!” “Wow, did you see that thing over there?” “No way! A pirate ship? Get out!”

There were many in-depth conversations of that nature. Nerds nerding, geeks geeking, and a general level of love for story and character that even the most crotchety, jaded douchebag in the world couldn’t help but appreciate.

The people at ComicCon haven’t lost their sense of wonder. And now, I want mine back.

But I’m worried that losing your sense of wonder is very much like losing your virginity: there are no take-backsies in the latter, and maybe not in the former, either. How do I lighten up when I step into that movie theater? I mean, now it’s $12, not $2, and if I don’t get my money’s worth I feel all stompy and cheated. So there’s that.

I need to learn how to shut off parts of the brain and just watch. I at least need to try. Once upon a time, going to the movies was one of the best damn things one could do. Now the best I can hope for is three out of four “mehs” on the “well, it wasn’t awful” scale.

Is it my competitive streak? Is it the fact that I look at everything and wonder how it could be better? Is it the sad fact that — quite often, dammit — the storytellers are just lazy and take us for granted? Is it the cult of personality that has popped up around certain writers and directors, creating an Emperor’s Clothes effect where I think many people are pre-disposed to throwing out the word “genius” before they even see the product? 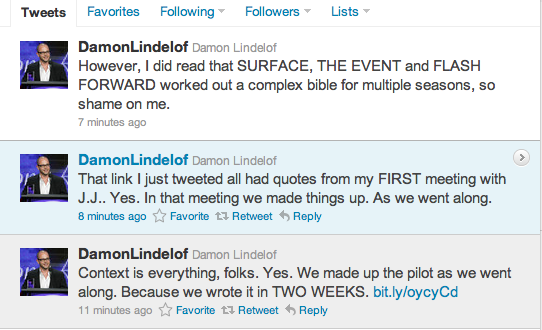 Is it because my sense of wonder was dangling by a thread, then finally put six feet in the ground by the ending of my beloved BATTLESTAR GALACTICA and because I actually believed the producers of LOST knew where their show was going?

I don’t know the answer. I do know it would be fun to just sit back and enjoy a film for a change.

How about you? Do you just enjoy your genre entertainment, or do you slice and dice? Pretty sure a big part of this is because it is both my job and my life’s goal to make great entertainment, and analyzing the craft is part of constantly getting better, and that doesn’t apply to most people.

Or, is this just because we’re all getting older? We’ve been there, seen that. When a book comes out that is clearly a rip-off of something else we’ve read, we are offended, while the younger peeps that have no idea the former book existed think the later book is pure gold. As far as I know, the book I liked when I was a teenager was a direct rip-off of something else. Still, it sucks when blatant, pandering copycats are rewarded. The public doesn’t seem to know better … or, more accurately, the public doesn’t give a shit. They want good stories. As long as they get that, where’s the harm?

No magical answers here, Junkies, just a multi-part question to you all: have you lost your sense of wonder, and if you have, how come? Do you want that back, or do you enjoy being a more critical watcher of all the entertainments?