This April, ARealGirl and I have been doing a lot of back-end (awww yeah) work that y’all don’t see. We’ve called this “Get Shit Done Month.” We’re cleaning up delayed projects and getting squared away for creating brand-new fiction (and if you ask about MT. FITZROY, I will fart in your general direction).

One of the projects has been addressing the overwhelming demands of our website and social media. We’ve revised our social media activities over the past eight years, but as time marches on and things change you have to be flexible and adjust. Since many of you are creators, authors, or just curious about how such things work, I thought I’d share what we’re doing on the social tubes with top video marketing software.

MY WEBSITE:
This website is its own social media presence: we’ve got registered users and an active community. The site has gone through many changes since 2005. We started out with a simple site with five static pages, then a Drupal site created by Pulsar and Robbie Trencheny, then moved to a custom site created by BackMyBook.com. We’ve grown beyond what BackMyBook can do for the front-end part, so we’re moving to a custom WordPress site. We’re still using BackMyBook’s eCommerce suite, though, because it’s a great solution for us.

One of the biggest issues is spam. We’re getting hammered. We hope the open-source community of WordPress and the community spam-killing tools will help reduce the amount of hours we put into manually controlling that digital cancer.

So, in the next few months look for more changes here. We’re going to improve the layout and, hopefully, make all of our functionality work like a charm.

FACEBOOK:
When I started using Facebook in 2005-ish, it was primarily to promote my books and interact with the Junkies. Yes, I had a bunch of personal friends on there, but I do not have 5,000+ personal friends. A few years back, I reached Facebook’s 5k friend limit and couldn’t add anymore friends. So, we made a “fan page.” That worked well for years, but it always annoyed me that I had to post the same content in two places: first to my personal page to share with the fans who had followed me there, then on the fan page to share with everyone else.

The second problem was the URL. I made my personal page facebook.com/scottsigler years ago, as soon as that option came available. But, I wanted the fan page to have that address, and I could not because it was already used. So the fan page was /scottsiglerpage, which I hated. I wanted facebook.com/scottsigler so I’d have one easy place to send new fans, where they could follow (which they could not on the maxed-out 5k+ personal page).

Earlier this year, peeps at my publisher, Crown, were able to chat directly with Facebook and ask them to combine the two pages. Presto-change-o, we merged the two pages and I got to put the /scottsigler on the fan page. Problem solved, suckas!

There’s still an issue that my personal page has 5k+ followers. The duplicates were supposed to be purged out in the merge, but that part didn’t work and Facebook couldn’t fix it. I’ll work on that later in the month, possibly even shut down my personal page and make a brand new one. I don’t want to miss what Junkies are saying to me because I don’t use the personal page.

So, can do you, author or creator, learn from my experience with Facebook?
Make a fan page. Make that page’s URL end in your brand. DO NOT MAKE IT THE NAME OF YOUR BOOK OR ALBUM OR PRODUCT! You are going to make more stuff after that product. Make your Facebook page end in /yourname, where “your name” is the name that will go on the cover of future products.

Twitter is a great tool for creatives. It’s a solid way to stay in front of some of your core fans, or to disseminate info about new product releases, news coverage, etc. The most important function, however, is the same function it serves for most users: a way to share your thoughts and what’s going on in your life.

There are hundreds of “Top Ten Secrets to Using Twitter To Make Bank” posts out there, so I’m not going to get into any of that. I’ll tell you what I’m doing with it lately.

Once upon a time, circa 2005-2008 or so, if someone followed me on Twitter, I followed them back. I tried the “auto-follow” approach, with a canned message that would say “Nice to Tweet you!” It was fun for awhile, but around 2008 or so I realized I was following a lot of spam accounts. I turned off the auto-follow and have been purging ever since. When I started this purge, I was following about 12,000 accounts, many of which were inactive and/or spam. Ugh. That’s a freakin’ mess and it’s taken awhile to clean it up.

The Great Unfollow of 2013
Right now I’m using justunfollow.com‘s free service to manage this. You can purge about 25 users a day from your lists for free, or upgrade to a paid service and nuke ’em all from orbit (just to be sure).

• Unfollow those that aren’t following me: I’m doing quite a bit of this. I still follow 6,000+ people, so there’s a ton of action in my Twitter feed. But, if someone has soured on my constant tweets about poop, pee, Twinkies and the Detroit Lions, and has unfollowed me, I’m probably going to unfollow them. Twiter is about finding like-minded people, and/or following persons of interest. If we’re not like-minded, I have enough going in without seeing your tweets.

• Inactive accounts: Because I am still following so many people, this is another way to reduce the number of people I am following. If you’ve been inactive for three months, I probably already unfollowed you. It’s nothing personal, it’s just business …

• People with political views I do not agree with: That does not get you unfollowed. I’m an atheist, but if people I follow like to tweet about their love for God and Christianity that’s not a reason for me to unfollow. I’m also pretty moderate, which means the one-sided myopic views of the ultra-left or ultra-right often rub me the wrong way. Still, I usually don’t unfollow unless the user (from either side) is spewing illogical hatred on a regular basis. I encourage and embrace differeing opinions, but life is too short for people who are too far gone to consider the other’s sides viewpoint.

• BUT: Douchebags, assholes and fuck-tards: Yes, if you are an unmitigated ass-hat, I aint got time for that. Straight-up hatred, mysoginy, racism or wishes/promises of violence make for an easy unfollow.

How to spot the fakers, and use them to learn that big numbers don’t result in big sales: 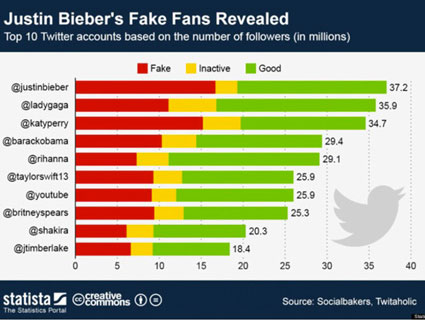 • Are they adding a consistent number of people every day? Go to twittercounter.com and check it out. If they add, say, 36 followers every day for two weeks straight, that means they probably paid for a service that added followers for them. There’s nothing wrong with that practice, but it’s good to know so you don’t get angsty that you’re doing something “wrong” because you’re comparing your following to theirs.

• They have 200,000 followers, and are following 199,500: If the following/follower numbers are very close, and very high, it’s probably because they are auto-soliciting other Twitter users that have the primary goal of just growing numbers. You follow me, I follow you. That doesn’t help sell books. It’s a fun game, sure, but if you see people with these kind of numbers don’t spend a lot of time worrying about how they market their products.

• Sometimes that author you’ve never heard of has a huge following because they are legit. It’s true! There are a lot of authors who are kicking ass, and they don’t require your awareness to be successful. They sell a ton of books and have a ton of followers. These are good people to follow and watch. How do they interact on Twitter? How are they marketing? There are people out there who did it naturally from whom you can learn a great deal.

• I’ve never heard of this woman: how can she have 250,000 followers? If an author you’ve never heard of has 200,000+ followers, odds are they are using a service for that (or they’ve been tapped as “recommended” by the Twitter staff), and also that they are very much full of shit. That’s not everyone with big numbers, mind you, but Twitter is easy to game and if you want to shell out some bucks and/or auto-follow people whose only goal is to get more followers. So if you see an unknown author (at least unknown to you) with giant-ass numbers, and you want to know if you’re missing out on someone who could have great business practices to emulate, check out http://fakers.statuspeople.com/. Sometimes it’s easy to see that that user is implementing a “bot follower” service.

Here’s an example. I often look up authors with high numbers of Twitter followers and follow them, looking to see what I’m missing, what kind of different things I can do to find new fans, etc. I found the user in the image below who has 386,000+ followers. Wow, right? Then I checked on StatusPeople to see if those followers were legit. The image below shows that I probably don’t need to be watching this person at all:

GOOGLE+
I love G+. I think it’s an excellent way to interact and share. We’re not doing much here other than just sharing the same things I share on Facebook and Twitter; we just don’t have time to exploit any unique features.

If you’re a creator, you need to be on G+. It reminds me very much of Facebook back in Facebook’s early days: it didn’t do all that much, but there was this feeling that it was going to topple the 800-pound gorilla known as MySpace. G+ isn’t going anywhere. It will continue to develop, so get your page up and get in the habbit of using it to share with people who prefer that service.

THE SOCIAL WEBS!
There’s a few more things we’re doing, but those are the primary areas with which we spend time. And come May, Junkies, I could give a crap about all of that stuff, because it will be time to write new stuff! If you’re a creator, your real fan base comes from creating things, so don’t get too caught up in the Social Webs.