Now you have to pay to record a show? Huh?

Let’s get a few things out of the way, so that in case you don’t read to the end of this blathersnape you won’t make these rather obvious comments:

• Yes, I am cheap.
• Yes, I am old and crotchety when it comes to gouging the customer.
• No, I haven’t done enough research to find ways around this situation.
• No, I am not a big fan of “change.”
• Yes, this is a giant “First World Problem” rant.

All good? Let’s get into it

Back in 2006, the Evil Queen and I droped some bucks on our first flat-panel TV, a 42″ LG plasma with a built-in DVR. We thought we were pretty fancy. We’re big movie fans and we love watching football (obviously), so we thought it was worth the expense to have something we really liked. Also, FIFA ’06 looked pretty kick-ass on it, so there’s that.

The TV also had a built-in cable-card reader, which will prove to be significant later in this rambling post. What’s more, it had built-in a TV Guide service — we had show schedules, one-touch DVR recording scheduling, a 200gb hard drive to save shows … it was pretty pimp. These were all features LG was touting at the time.

So from 2006-2011, we were pretty tickled with this gadget. Then, it started acting up. Say I was up until 3am working on a deadline so I slept on the couch: sometimes, the TV would just turn on for no reason. When you write horror for a living, a full-volume infomercial bringing you out of a dead sleep can make a body wonder if ghosts are real (they are not, btw, but that doesn’t change the face that I might have piddled myself a little at the time). The TV also started missing recordings, or would stop recording with five minutes left in the show (when that happens for WALKING DEAD? Yeah, it’s way up there in the Righteous Rage of First World Problems ranking). Then we started to lose channel and program information. Turn the channel to something that looks cool, hit “get info,” and it would most often say “no information available.” Again, a minor thing, and we rolled with it.

Keep in mind, we’re paying a premium price for that information. We pay Comcast, Comcast has that info, therefore that info should appear.

I’m ordering replacement parts for the sucker and still trying to fix it. Taking it to a TV repair shop would cost more than the price of buying a brand-new TV. That’s my TV at right, skinned alive!

So we had a TV that would randomly turn on and off, couldn’t record for shit, couldn’t show us program information, and would sometimes just ignore the power button (you’d turn it on, the TV would give you the finger and say “I’m on a break, buddy, come back in five minutes”). All annoying things, but even in total it wasn’t worth spending four figures to replace it.

Finally, the TV started freezing the picture while the sound kept playing. That also deactivated the remote control. You had to unplug it and plug it back in to get it to work. To get through a football game, we have to turn it off and on four or five times. When that happens in the last five minutes of BREAKING BAD, and you miss the good parts (because your TV won’t record it, ’cause it’s broke), that’s a little frustrating. So, when you take all of these minor issues and then realize we got six solid years out of it, we replaced it.

GEDDOFF MY LAWN!
And here comes the part where I get crotchity. We wanted something similar to our LG. Come to find out that while Rumple Stiltstech slept, the world changed around him, and no one seems to mind paying out the ass for services that you used to have the option of getting for free — like recording a freaking TV show.

The cable card converts the Comcast signal into a form your TV can use to show you the channels (or, it’s got some fancy code so Comcast can make sure they gettin’ paid for their product). Cable cards are cheap to rent, at like $2.50 a month, and we actually got a discount for ours. Know what TVs don’t have anymore? Cable card slots. They don’t make TVs that have them, or if they do, those TVs aren’t at BestBuy.

Why? Because Comcast wants to rent you a cable box for $8.50 a month. They don’t want you to own a cable card that fits into the TV, because that $8.50 a month leveraged over 22 million customers really adds up. But most people are paying more than $8.50, something which I shake my cane at in the next segment.

Important to note: Comcast has a desk right in the BestBuy TV department. Is it any surprsoe there aren’t options that help you spend less money with Comcast? This is a conspiracy that puts JFK’s death to shame, I tell you.

Yes, I can buy a flat-panel TV over the internet, sight-unseen. Or maybe you can. That’s too much money to drop for us without getting hands-on and getting the name of the guy selling it to me.

I HAVE TO PAY TO RECORD?
Remember when I told you that with my LG, I could just hit “record” and it would record the show to my built-in hard drive? Guess what TVs don’t come with anymore. Just one guess. Okay, I’ll tell you — they don’t come with built-in DVRs.

I’m probably grumpy because I got to do this for free, but I’m amazed that the consumer marketplace let this happen over the past ten years. You have to pay for the right to record, something that’s alien for an 80s kid who grew up with VCRs.

Here’s the thing: I asked for a stand-alone DVR, and BestBuy didn’t have one. Not one. What did they have? TiVo. 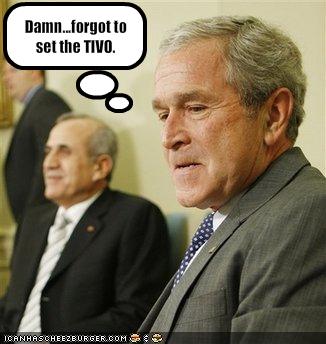 WTF WITH THE TIVO THING?
Are you kidding me? I get to pay $150 for a TiVo DVR, and then pay at least $15 a month to record on it? I am shaking my cane at all of you. I tweeted about this and got responses that most people love their TiVo. That’s great. More power to you, if you’re paying for a service and you’re happy with that service, awesome. But I don’t want foreign chanels, I don’t want Netflix streamed, I don’t need all the bells and whistles — I just want to hit record and store my basic cable for later, basci cable that I’m already paying for.

Keep in mind here, the problem isn’t that it’s illegal to record. This isn’t a copyright or intellectual property situation. Comcast is happy to let you record, if you pay for the right to do so. Comcast also allows another company (TiVo) to record the shows for you, so it’s supposedly open to the free market. Again, there’s no legality issue, it’s just a matter of Comcast buddying up with TiVo to remove the ability for you to record without using one or both of them.

Why does this piss me off? I should have the choice to pay for renting Comcast’s recording gear (which is probably excellent), or go buy my own. That choice seems to be gone. Comcast will not sell you a DVR (please refer to the $330 million in potential monthly revenue, above). If it costs me more to buy my own, that’s my business and I should be able to make that choice for myself. It looks like I can buy a Moxi for $500, but reviews say this thing is a piece of crap.

TiVo looks like a fantastic service. It really does. I just want the choice to use it or to not use it.

I DON’T LAY THAT PIPE
Comcast puts down the cable that brings the signals, I get that. It’s a huge company with a lot of overhead. I get that, too. No, I can’t magically conjure up stuff to watch on the TV. Should they get paid for what they do? Absolutely. However, I do pay that, to the tune of $85 a freakin’ month. I’m already paying for the programming, they just want to gouge me for the right to time-delay the content I’m already paying for.

I DON’T WANT TO HOOK UP A COMPUTER, DAMMIT!
You all know I’m a TechTard™. I hear there are ways around this if I want to hook a PC to my TV. I don’t want to screw with this forever, I just want to record the freakin’ WALKING DEAD.

TIME TO CUT THE CORD?
Bah, these bastards have me. I want to watch the amazing TV shows that are out these days, and I love me my sports. They control the market. So I’ll keep paying for cable (for now), but I’ve got to find a way around paying $180 a year to Comcast to record a signal I’m already paying for.

For now, we’re old-school: we watch the show when it comes out live. In a way it’s like being back in the 80s again, even before VCRs. Or, we wait until long after the show is over and get the DVDs. Seeing as we’re too cheap to pay for premium channels, we haven’t even seen DEXTER yet.

WHAT ARE MY OPTIONS?
Hey, you Techies: is there a DVR with a cable-card slot I can snag that solves this problem? Have any of you had similar problems, either with tech or being a stompy old man about paying money you didn’t have to pay before?

PS: Do not spoil DEXTER. Don’t you do it.