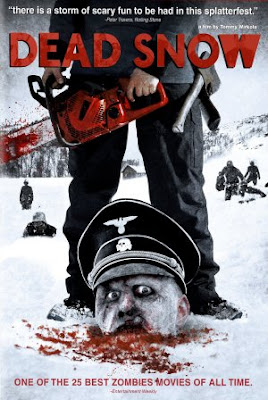 Yes, once again I am on the cutting edge of intellectual foreign films. This touching piece of post-war ennui, a 2009 Sundance selection, comes to us from Norway. An emotionally gripping tale of a nation recovering from the scars of global conflict, DEAD SNOW carries into the struggle of a group of young people trying to come to terms with …

… aw, screw it. I can’t keep this up. The movie is about frozen Nazi zombies. Now if you haven’t already added it to NetFlix from the words “frozen Nazi zombies” alone, then you and I are different people, son, but I’ll continue and try to bring you around to my way of thinking.

Released in 2009 as DØD SNØ, this Norwegian horror-comedy tells tale of a group of med students who — like all good, idiotic horror protagonists do — travel to the middle of bum-fuck nowhere for a nice, incredibly isolated getaway. There is drinking and fornication. There has to be, apparently, as it’s a horror movie. There is laughter and the establishing of characters. (also, if a “Romantic Comedy” is a “Rom Com,” is a “Horror Comedy” a “Hor-Co”? Not to be confused with “Whore Co.,” where I had my first summer job — don’t ask).

The discover of some random treasure activates/reawakens/reanimates a shitload of stormtrooper Nazis who occupied that same area during WWII. Zombies meet college kids, hilarity ensues. Good luck guessing who the “final girl” will be in this one, because you’ll probably be wrong. Much of it makes no sense, but it’s a zombie movie so I don’t think you’re watching it to reflect on the inner working of a Tolstoy opus, so stuff your mouth with Doritos and relax.

Directed by Tommy Wirkola, this film is preposterous and bloody and freakin’ awesome. If you liked SHAWN OF THE DØD, you will dig this is as well. It’s also up there with ZØMBIELAND. In fact, these might be the three best zombie comedies of the past ten years, and I don’t say that lightly.

I laughed my ass off. Some of the kill scenes are top notch. The concept of combining bad-guy dead soldiers with zombies isn’t new, as evidenced by CURSE OF THE CANNIBAL CØNFEDERATES, nor is Nazi zombies, as (unfortunately) evidenced by ZØMBIE LAKE.

DVD review: UNDER THE SKIN